If you have enrolled in your ForUsAll 401(k) - congratulations! Investing in your 401(k) is a great way to build a significant retirement nest egg. But if you are a young employee, retirement is a long way off. If you begin your career in your early 20s, you might work more than four decades before retiring. With retirement so distant, saving for retirement can seem like a low, low priority.

After all, there is rent to pay. And what about all those sneaky expenses popping up every month? It’s easy to think that the best time to start saving for retirement is “later.” Later might mean after you’ve received a raise or two. Or when you get those student loans paid off.

But there’s a risk with saving later. Later can turn into much later. And the longer saving for retirement is delayed, the more catching up there is to do down the road.

Here’s an example of trying to play catch-up:

Let’s say you think you may retire in 40 years. And suppose you are trying to decide whether to save $5,000 a year now, or $10,000 a year starting 16 years from now. We'll assume that under each scenario you earn a 9% investment return each year. For the record, we assume you invest the money at the beginning of each year. 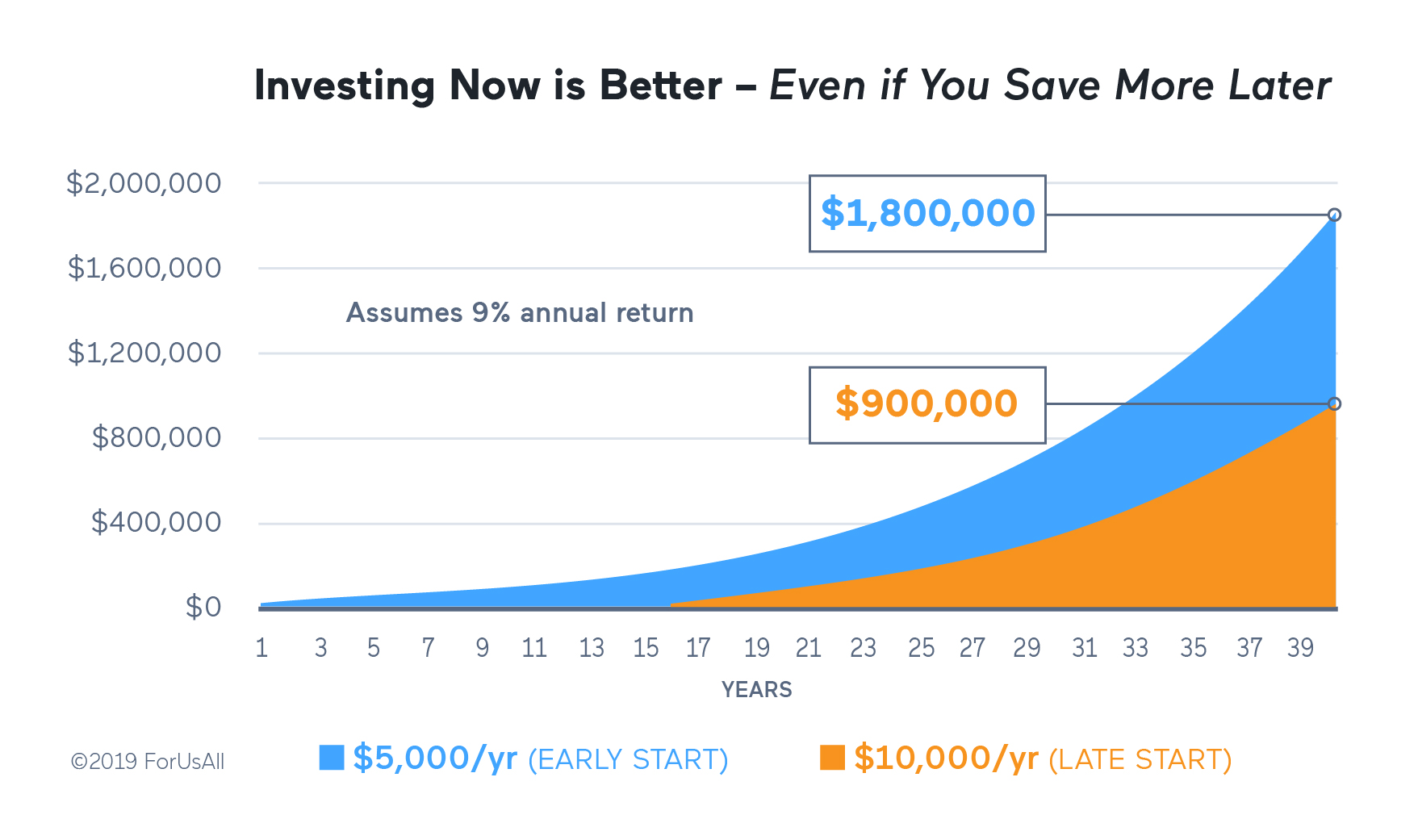 Those two lines show that even if you save twice as much money annually, by starting so much later, you accumulate less than by saving the smaller amount immediately.

Guess how much you’d have to save each year under the second scenario to reach the $1.8 million accumulated under the first? You would have to put away about $19,000 each year. That’s almost four times the amount you are saving each year in the first scenario.

So if you are going to start saving for retirement later, make sure it’s not much later.

“But I don’t know much about investing…”

Another reason you might put off joining the 401(k) is that you are overwhelmed by all those investment choices. If you are, touch base with a ForUsAll advisor. Our advisors are ready to answer questions about 401(k) investing, and even help with financial matters outside your 401(k).

But rest assured, you don’t have to be the next Warren Buffet to grow a meaningful retirement nest egg. The broad stock market historically has increased in value over long periods. So young investors have good odds of watching their retirement nest egg grow over the next two, three, or four decades.

A good place to start investing is in a low-cost broad stock market index fund. Of course, you may be automatically enrolled in a target-date fund. If so, that’s great! These funds do the investing for you. Target date funds set the asset allocation based on your age, and select the investments suitable for each basket of assets.

But let’s suppose you are assured of becoming a “better investor” later. Even so, odds are you’re better off putting aside money today. You can see that’s the case in the next chart.

Below we assume that you can invest immediately and earn a 5% annual return over 40 years. Historically, that’s a low assumption, by the way. Or, let’s assume you can earn a 10% annual return if you wait to invest until Year 16. In both cases, we are making annual investments of $5,000 per year.

As illustrated below, early investing pays. Despite earning twice the annual returns when you finally begin investing, the assets in the second scenario didn’t catch up with the first: 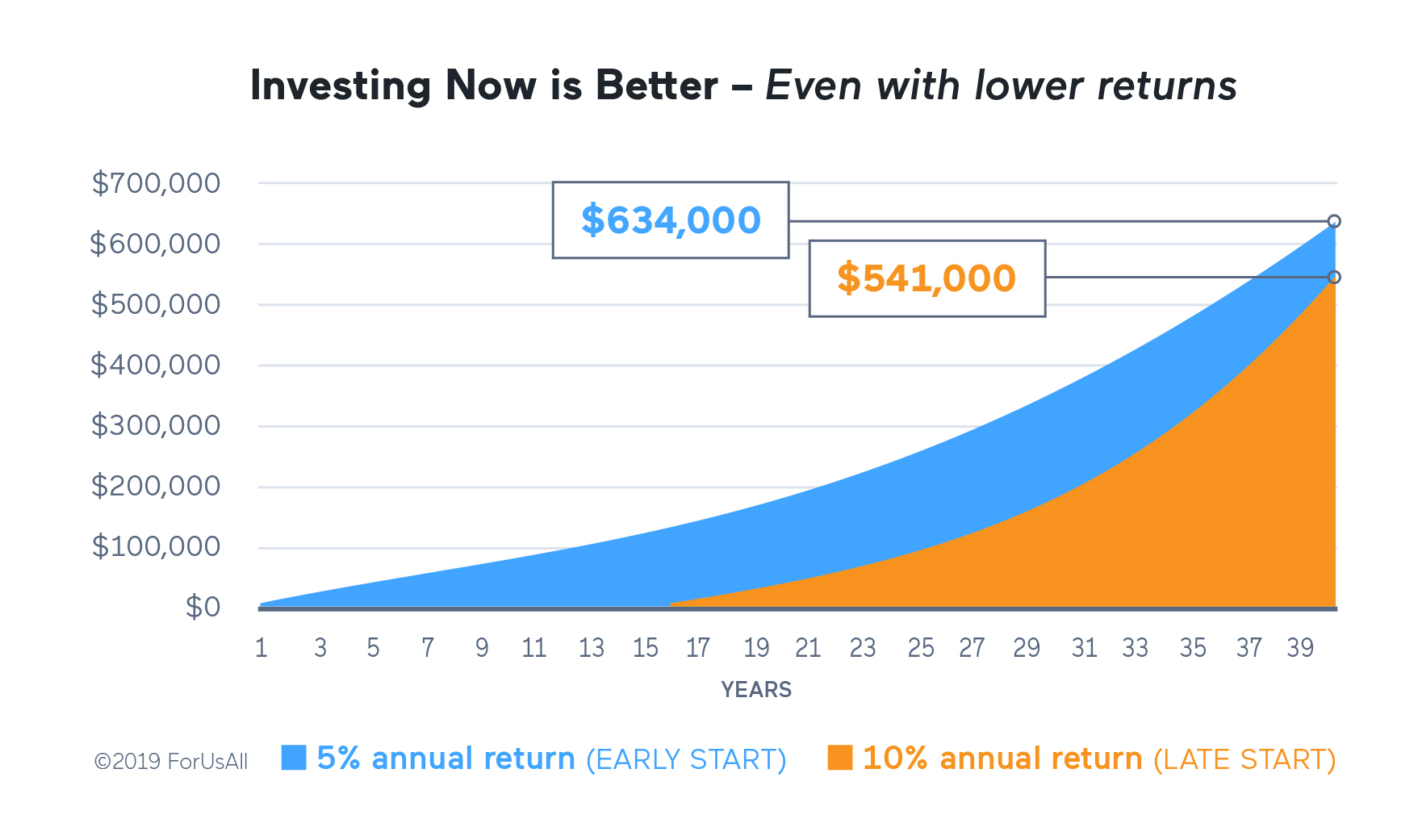 Power to the young people

When it comes to saving for retirement, younger employees have a tremendous advantage. That advantage is the ability to remain invested for three or even four decades, which allows your investment returns to compound for years and years before you take withdrawals in retirement.

Remember, if you have questions about your ForUsAll 401(k) we can help! We can make sure you are enrolled, and help you understand your 401(k)’s different investment options. Even if you can only afford what you consider to be “small” contributions, try to start investing now. You’ll be better off later.